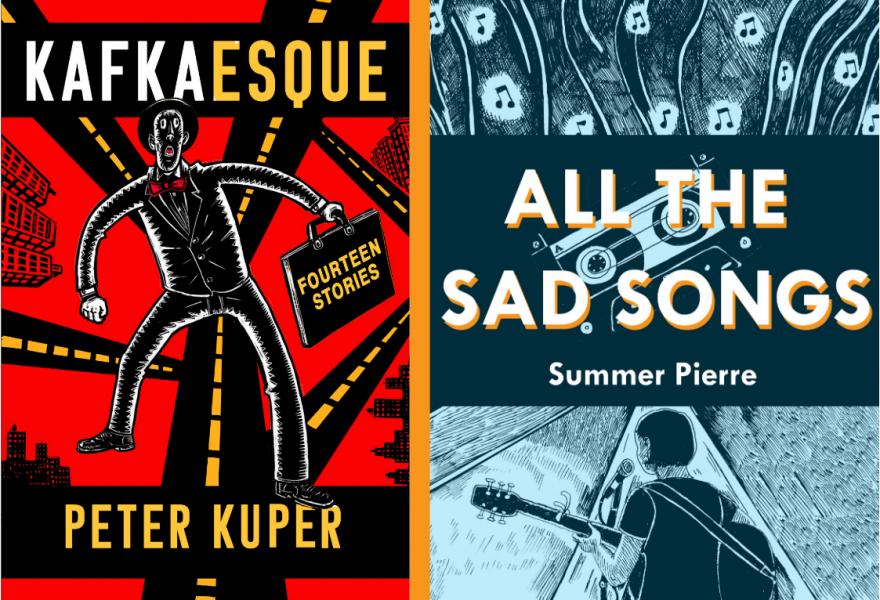 Long fascinated with the work of Franz Kafka, Peter Kuper began illustrating his stories in 1988. Initially drawn to the master’s dark humor, Kuper adapted the stories over the years to plumb their deeper truths. Kuper’s style deliberately evokes Lynd Ward and Frans Masereel, contemporaries of Kafka whose wordless novels captured much of the same claustrophobia and mania as Kafka’s tales. Working from new translations of the classic texts, Kuper has reimagined these iconic stories for the twenty-first century, using setting and perspective to comment on contemporary issues like civil rights and homelessness. Longtime lovers of Kafka will appreciate Kuper’s innovative interpretations, while Kafka novices will discover a haunting introduction to some of the great writer’s most beguiling stories, including “A Hunger Artist,” “In The Penal Colony,” and “The Burrow.” Kafkaesque stands somewhere between adaptation and wholly original creation, going beyond a simple illustration of Kafka’s words to become a stunning work of art.

Peter Kuper's illustrations and comics have appeared in newspapers and magazines around the world including Time, The New York Times and MAD where he has written and illustrated SPY vs. SPY every issue since 1997.He is the co-founder of World War 3 Illustrated a political comix magazine and has remained on its editorial board since 1979. He has produced over two dozen books including The System, Stop Forgetting To Remember and Sticks and Stones, which won The Society of Illustrators' gold medal.

About All the Sad Songs:

In her first full-length graphic memoir, Summer Pierre takes us on a journey through the soundtracks that shaped her. Through mix tapes, late nights in Boston folk clubs, and ill-fated cross-country road trips, Pierre weaves a moving meditation on music, memory, and identity.

Summer Pierre is a cartoonist, illustrator, writer, and teacher living in the Hudson Valley, New York. She is the author of the autobiographical comic series, Paper Pencil Life, as well as the books The Artist in the Office: How to Creatively Survive and Thrive Seven Days a Week ("A virtual bible for artists and day jobs" -The Boston Globe) and Great Gals: Inspired Ideas for Living a Kick-Ass Life. Her writing and art have appeared in Pen America, The Rumpus, Hobart, and The Nashville Review among other places.

Chris Duffy is a writer and comics editor. He worked as Senior Comics Editor at the award-winning Nickelodeon Magazine for 13 years and currently edits SpongeBob Comics for United Plankton Pictures, as well as other projects. Chris was part of the board of advisors for Art Spiegelman and Françoise Mouly’s Toon Treasury of Classic Children's Comics. His comic book writing includes scripts for Bizarro Comics, Bizarro World, Superman Adventures, Scooby-Doo, What If?, Rugrats Comics Adventures and Batman Chronicles. He is the editor of two popular comics anthologies for kids, Fable Comics and Fairytale Comics.

All the Sad Songs (Paperback)